Engine-tattooed, head aching
with waspish buzz of motors,
I drove endless staccato tar roads,
indelibly grimy from every oil change.
I have breathed oil smoke for so long,
I olfactorize smog among magnolias,
the scent of mufflers in florists,
chemical run-off in museums
and a boiler room in the Vatican.

Nowadays, the deer and rabbits seem no more than oddly
fluid machines; the tulip blossom lacks the precision of pistons.
I look at the clock face of the moon
arcing and re-cresting—I see 0s and 1s
coded in moon craters and mountains, binaries
in a chipmunk’s eyes and/or snake’s undulations.
I often dream that I have sprouted wheels
and my lungs and heart have turned into a manifold and engine.
I am haunted by the mechanizations of musical instruments--
melody approximates the power of a revving motor or jet turbine.

This morning I daydreamed my fingers were burned
down to the bone by my computer keyboard, high-velocity
shards from the monitor shrapneled my face, and
poison seeped from USB ports.  I got up to get a cup of coffee
and the coffee machine brooded:
coiled, as if to spring on its prey.

The hippocampus
and the thalamus
are connected by a bridge:--

In my dreams,
my old Ecology professor
Dr. Culler
lectured for hours and hours.
Only three students remained
at that marathon of epistemics,
a truly epic ordeal.
I typed notes till my wrists were sore;
my hands fell off, and rolled under
an adjacent desk.  My English professor
sitting in that chair
gave me back my hands
without a word.  This happened three times,
but on the third time, my English professor was gone
and I sat there like Noah
with two olive tree branches in his lap
and now the dove had not returned.
It occurred to me with the unlearned certainty of dream knowledge--
The world outside has changed!
Ecosystematcially, the biota,
our Mother Earth, like Penelope,
was finally reunited with Odysseus--
the warty suitors had been put
in their rightful places--
ashes to the wind.
And I thought to myself,
Now, Telemachus, the journey
through adulthood begins.
Looking at my two stalwart classmates,
I saw the same realization in their eyes.

Exordium: open Dell-to-page dialogue--
tell Virginia this is her opening
cue, she will come through the door
gently ask her

Dell-ear-ious, doesn’t she act
the role?

Her clean page read
and tread by the boys who came
to play with her brother—now they are walking back from her house,
just the three of them.  They have other stories to tell;
they do not talk of what just happened.

She pastes her wet pages on the inside of her locked door
to bolster the strength of wood behind them,
No one will get to my book again!
protecting private passages
of her diary from intrusive meddling.
Now she is unfraying the pages in aftermath:
crumpled and smeared, but recoverable.

How surprised the boys were to find her alone at the house--
It started with them leaping on the table and chairs,
surging and jumping, screaming like cockatiels;
at some instinct-coordinate they switched to gorilla speech--
they who know when a certain time has come,
they who smell changes in the air,
perhaps not even a scent, maybe just  pheromones:
Dell-ear-ious deluge seeping from her skin.
and rising as a hues in a mist from her body, canary yellow…

Virginia, you have known opening cues all your life--
you grew up in that type of neighborhood.
When I tell you there is an opening
door, you shed their violence, wordless, like molted skin,
walk out into the gardens, and do not stop when you reach the woods.
You walk along the bends of a river,
unheeding the bruising
of body and sky,
heedful of the nightingales
soaring limb to limb, singing--
voices unexpected, but just what is needed.

Can the songs of a nightingale be transcribed?

Philomena singing in a forest alone,
no one near--
heard, felt or fled is her music?

I ask via Dell-to-page questions I have asked myself:
Could I ever take them back,
those opening cues heard again and yet again?
Could I? And how?
More than half the night I am questioning, sometimes singing--
and sometimes Virginia, O sometimes... 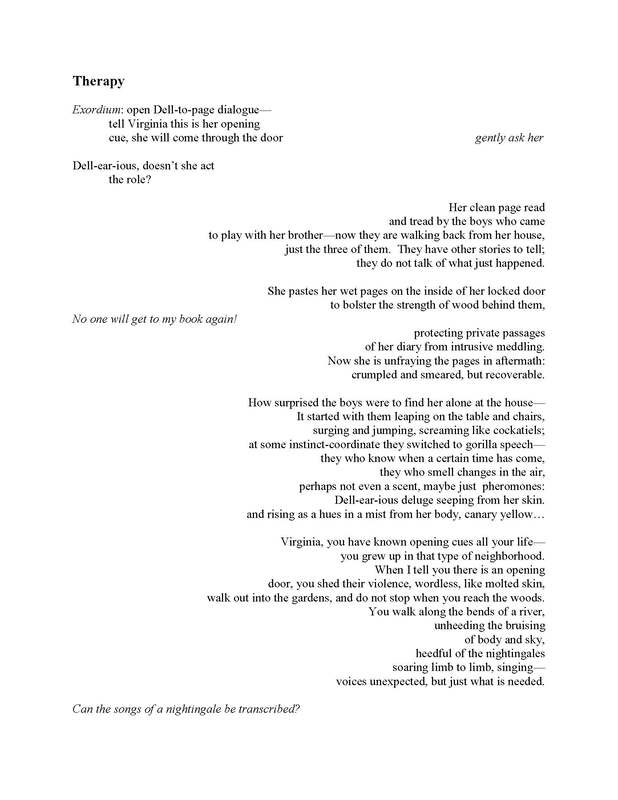 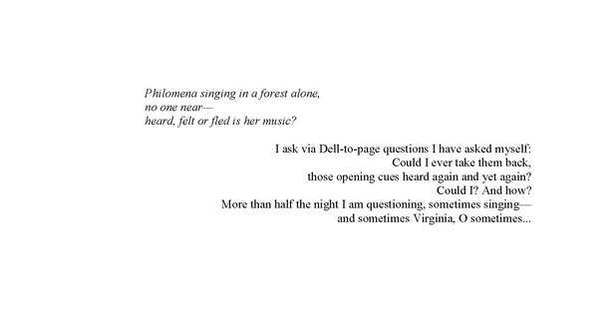 August Smith received his BA from Loyola University/New Orleans and MFA in Creative Writing from Cornell University. His poems have appeared in Wide Open, The Great American Poetry Anthology, and Down in the Dirt, and are forthcoming in Bending Genres and the Writer’s Egg.  He resides in Alpine, TX.